Back to auction
You'll need to Sign in or Create a free account before bidding.
PrevLot 11 - Harry Jones Thaddeus 12 / 145 Next Lot 13 - Jack Butler Yeats 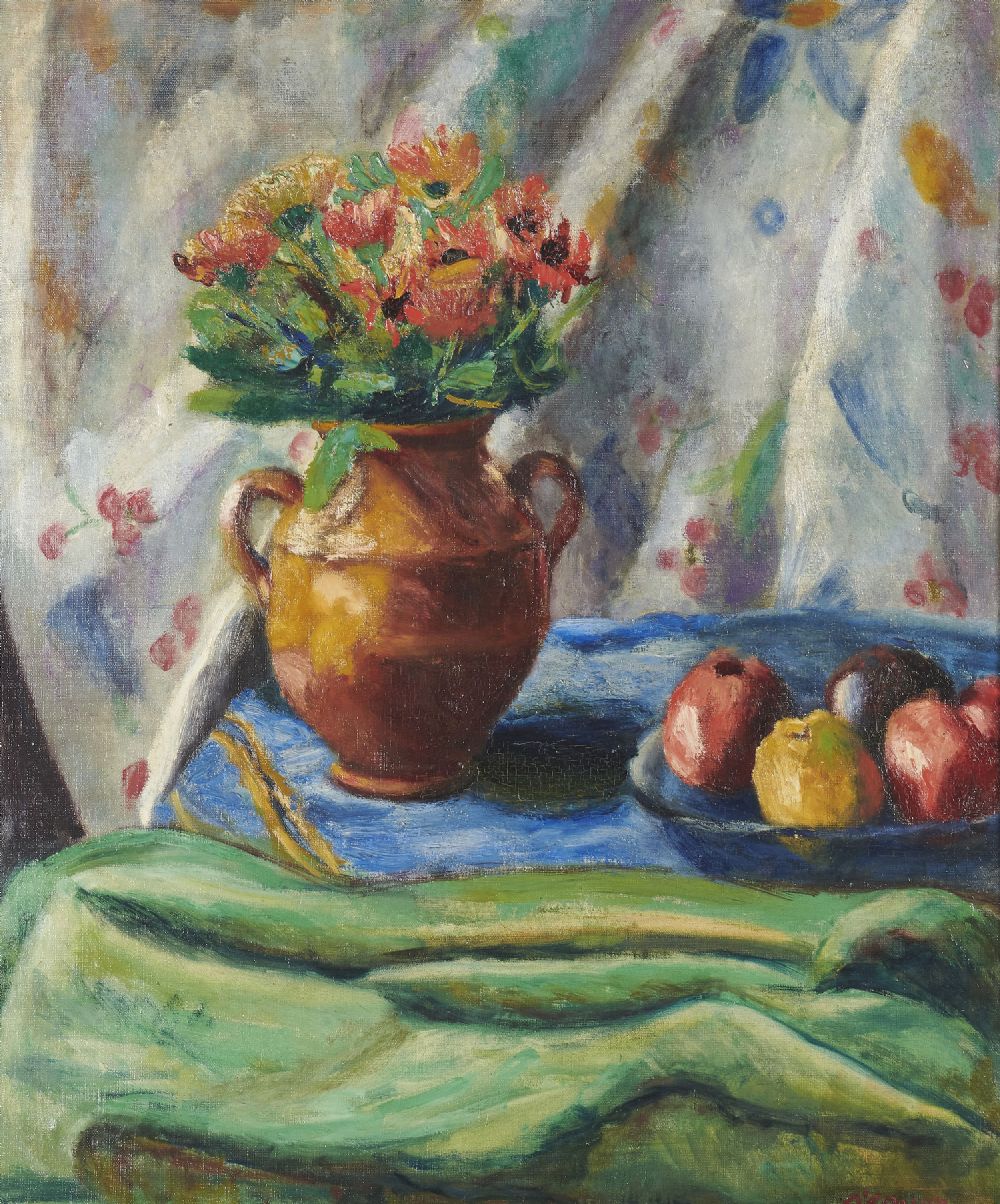 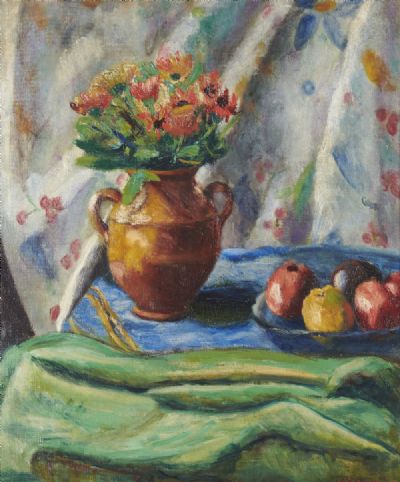 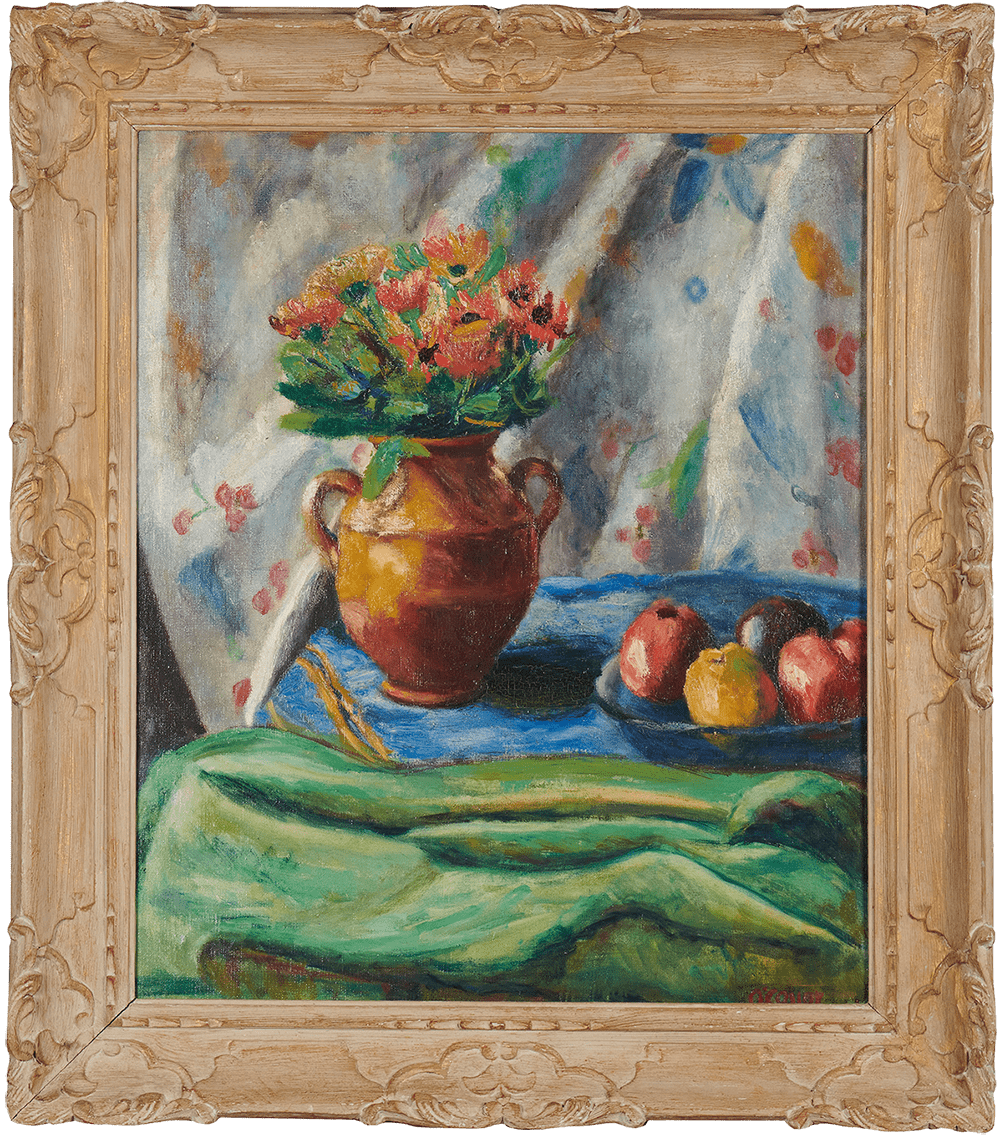 In this opulent still life from the early 1920s, O'Conor has unusually combined homely items - flowers (possibly anemones), apples and unsophisticated ceramics - with elaborately arranged draperies. The latter progress from the white fabric printed in a floral pattern that does duty as a background, to the blue and green materials underneath and in front of the vase. Whilst the green picks up the colour of the foliage in the vase, the blue echoes and strengthens some of the tints appearing in the folds of cloth behind.

Having made his selection, O'Conor has then arranged the composition within a pyramidal structure that lends it weight and solidity, as does the deployment of strong side lighting from one of his large studio windows. Even though most of his output during the 1920s comprised indoor subjects, he consistently made the most of the natural daylight that entered his capacious first floor studio in Montparnasse through a series of windows overlooking a courtyard.Â

The accumulation of objects seen in Flowers and Fruit contrasts with the more focused approach adopted by O'Conor in another still life featuring the same two-handled vase - Red roses in a Jug set on a Napkin. The layering of stuffs in the present work recalls the fashion for 'pronk' still lifes in seventeenth-century Holland, exemplified by painters such as Jan Davidsz. de Heem and Willem Kalf. O'Conor would have been fully conversant with such pictures from the Louvre and from his time spent in Antwerp as a student. Ever the well informed connoisseur, at this stage in his life, with Cubism, Orphism and Dadaism creating shockwaves in the art world, he was prone to looking back in time to earlier traditions he respected, only to then update them with a bright fauvist palette very much of the twentieth century.

Amongst those who purchased still lifes from O'Conor in the 1920s were Roger Fry, Somerset Maugham, Matthew Smith, Charles Hall Thorndike and the French State (now Musee d'Orsay). Â

For the upcoming auction on May 18th, the lots will commence closing at 6pm. Lot 1 will close at 6pm with each subsequent lot closing at 30 second intervals.