Back The Studio of Reginald Gray

The Reginald Gray Studio Auction spans the decades of Gray’s career from his beginnings as a set designer in Dubin to painting alongside Lucien Freud and Francis Bacon and some of arts greatest painters in 1960s London. Finally, the sale features portraits of various individuals painted toward the end of his life.

Growing up in a middle-class family on Grove Avenue, Blackrock, Gray’s life started out on the traditional route. With his father working in the Guinness laboratories, Gray attended a local national school and later the old technical institute in Blackrock. Nevertheless, Gray displayed a creative flair and from the age of 19 took an artistic path when he exhibited at the Dublin Painters Gallery as part of the Dublin Atelier. Establishing a studio on Leeson Street, Gray encountered Irish artists including Patrick Swift. The friendship with Swift would have introduced Gray to international experiences and contemporaries, including Lucien Freud, which had a profound impact on Gray as a portrait artist. A portrait painted by Gray of Patrick Swift comprises part of the present Studio Sale. 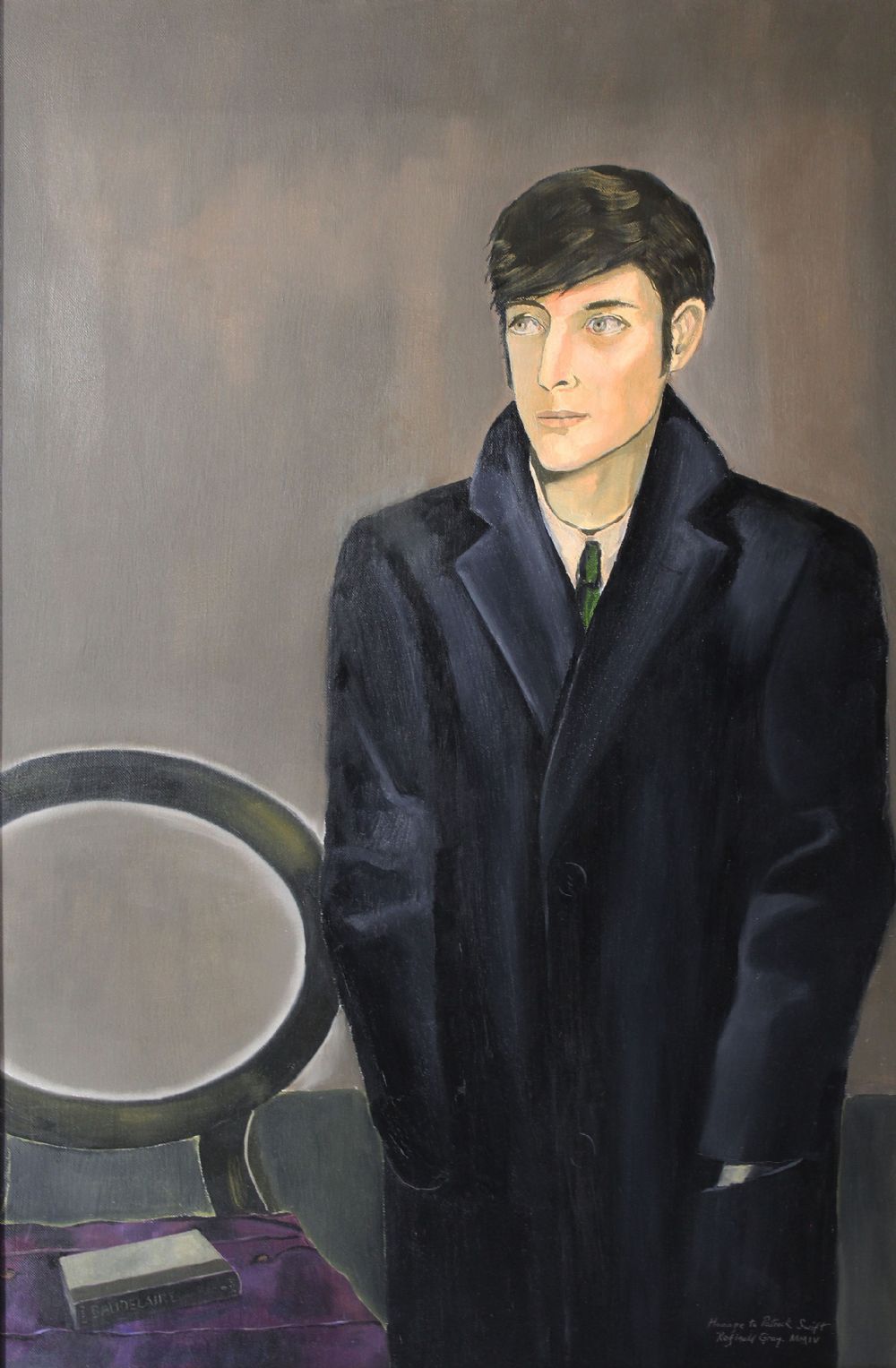 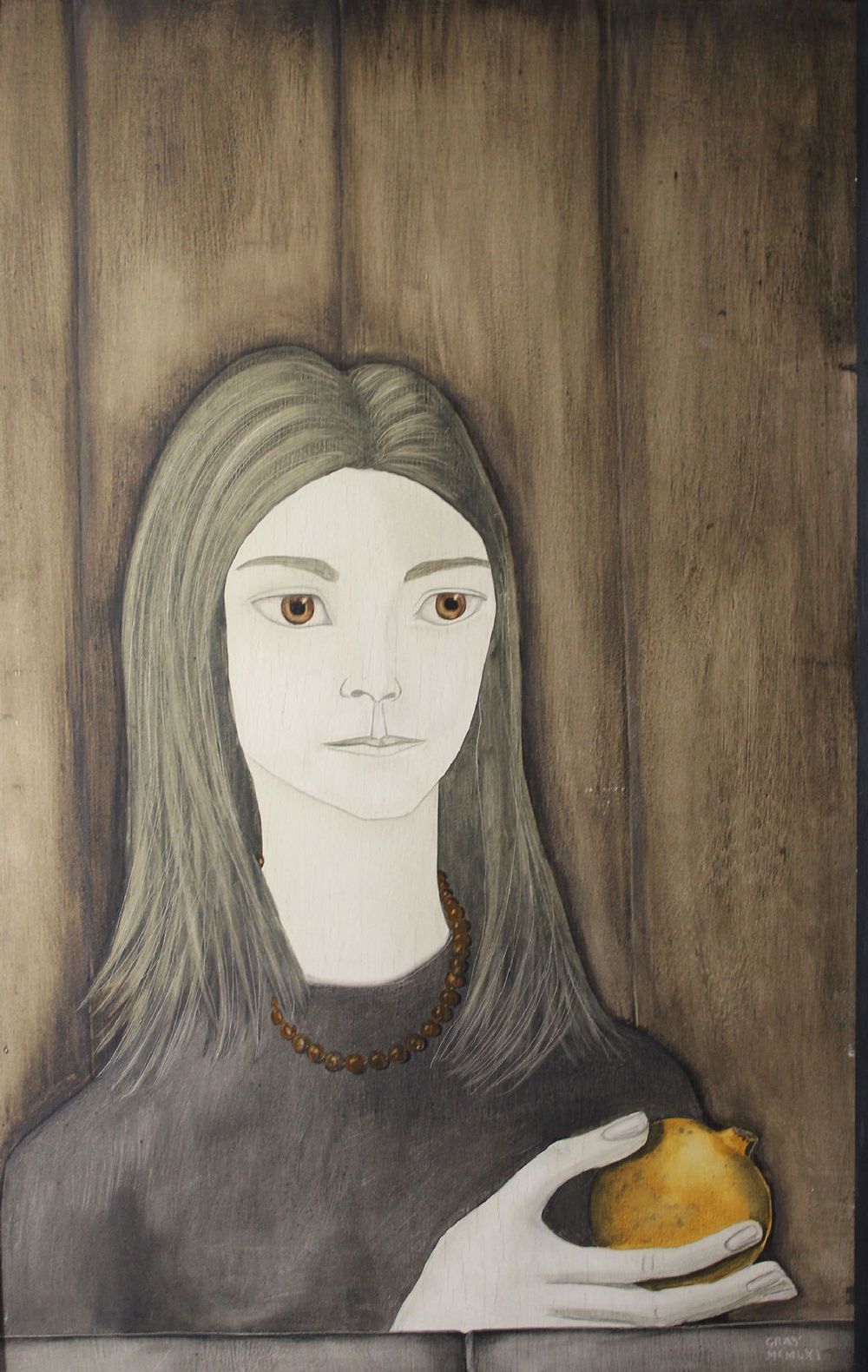 During his formative years Gray briefly attended The National College of Art and Design. Here he was taken under the wing of Cecil Ffrench Salkeld who housed Gray and helped hone his artistic talent. Gray also dated his daughter, Celia. Through NCAD and Salkeld, Gray became acquainted with a variety of Ireland’s writers, painters, and musicians. An introduction to Alan Simpson, director of the Pike Theatre, resulted in work as a set and costume designer. Gray worked productions for the Pike Theatre, The Gate, The Gaiety and The Globe. Plays designed by Gray, such as The Rose Tattoo, were produced to the backdrop of conservative Ireland, still unsure how to greet provocative productions. As a result, Gray was caught amid controversy for his role in creating plays deemed inflammatory. Gray’s close relationship with the literary and theatrical community is reflected in his role of best man at the wedding of Brendan Behan to Beatrice, the daughter of Cecil Ffrench Salkeld. The wedding began at 7:30am in the Church of the Sacred Heart, Donnybrook and continued to Kennedy’s in Harold’s Cross, Bewley’s on Westmoreland Street and finishing in the Lincoln’s Inn (and a rendition of the Culan by Behan). 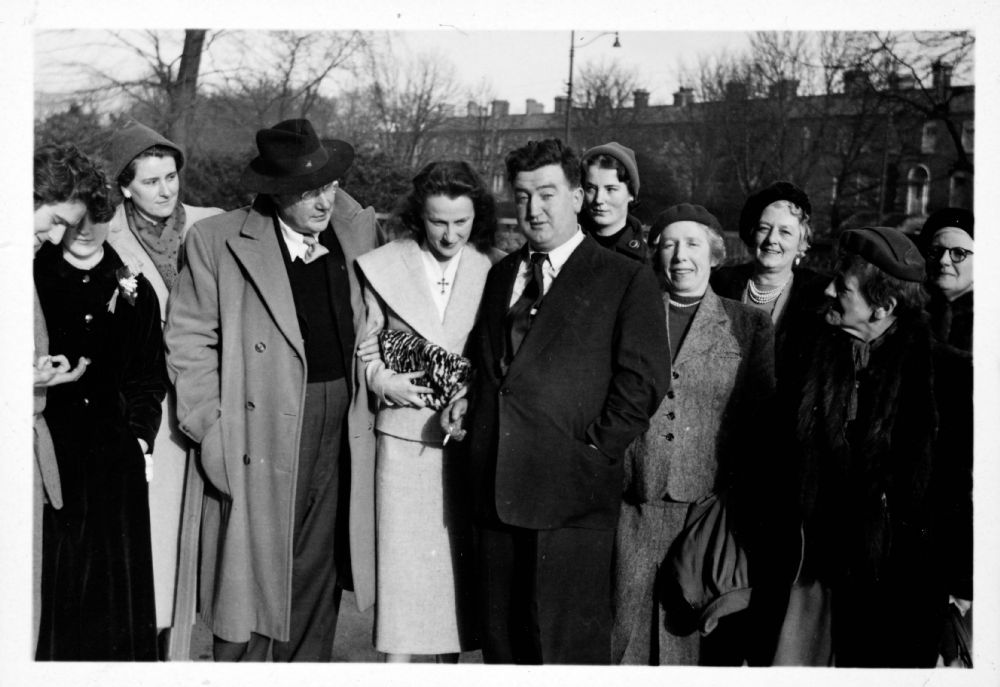 Ireland’s small and intertwined artistic community combined with the shackles placed on artistic expression led to Gray’s decision to travel to London in 1957. In London Gray was immersed in the School of London, producing his own bohemian and figurative works. Gray’s first solo show took placed in 1960 at the invitation of Eric Holder, principal of Abbott and Holder Gallery. The exhibition was well received and resulted in further shows at the gallery in 1961 and 1962. During 1961 Gray also had solo exhibitions at the Collectors Gallery, Portobello Road and the Caravan Gallery, New York.

His medium of choice was the use of egg tempera, which he began to use after arriving in  London and which would continue for the remainder of his career. As he describes it:

‘I was 27 years old and had just arrived to live in London, from Dublin. A book that I took out from Paddington lending library on the Italian Renaissance included a black and white reproduction of a portrait by Domenico Ghirlandaio 1449/94, titled “Costanza Caetani" (collection National Gallery, London). I was overwhelmed by the beauty and austerity of the work and went to the Gallery to see the original, but found that it was not on display. I telephoned the Gallery and made an appointment to see the portrait. A Gallery official took me to a basement storeroom and at last I saw the egg tempera on panel of dear Constanza. Since that day....that portrait has lived deep inside of me both as a stimulant for living and for working……’

Gray is perhaps best known for his portraiture of celebrities and cultural figures, in particular Samuel Beckett and Francis Bacon. Alan Simpson, an acquaintance of Samuel Beckett, suggested Gray fly to Paris and paint the Irish playwright. On seeing the finished work in 1961, Beckett proclaimed – ‘you had a bloody good look at me’. The portrait of Beckett was sold through deVeres in December 2020 for €20,000 to the National Gallery of Ireland where the work will soon be unveiled. It was in London that Gray began to paint in egg tempera, the medium of choice for the remainder of his career. During his sitting for Gray, Francis Bacon joked that the painting was ‘bacon and eggs’. The resulting portrait was acquired in 1962 through Abbott and Holder by Aubrey Beese who subsequently donated the piece to the National Portrait Gallery, London in 1975. Gray’s portrait ability is reflected in the trust placed in him by two of Irelands greatest artists, both of whom were naturally inclined to eschew the sitter’s chair.

From London Gray travelled to Paris where he spent the remainder of his life painting portraits of various sitters.

The set designs for The Matchmaker, Kings Threshold and various set and costume designs feature in the Studio Sale. Some of Gray’s bohemian works are included in the sale such as Two Young, Rouen and Girl with Pomegranate. The sale further features a self-portrait of Gray in a wine bar. Most works in the sale consist of Gray’s later portraiture of persons in his life.

Reginald Gray died from cancer in Paris on 29th March 2013.

‘Fifty years have now passed since I left the Dublin College of Art and braved the wilderness of a life more inclined to "la Boheme" than to the comforts of the "nine to five". Out there.....there are    other artists who have influenced me, and others for whom I have had great admiration. I suppose the big influences of contemporaries have been Graham Sutherland, Lucien Freud and Mario Sironi. Those whom I have admired are Augustus John, William Coldstream and Francis Bacon.’
Reginald Gray, November 2002
This website uses cookies. By using the site, you consent to the use of cookies in line with our privacy policy. Find out more OK, I understand